Australia, the smallest continent and one of the largest countries on Earth, lying between  the Pacific and Indian oceans in the Southern Hemisphere. Australia’s capital is Canberra, located in the southeast between the larger and more important economic and cultural centers   Sydney and Melbourne. 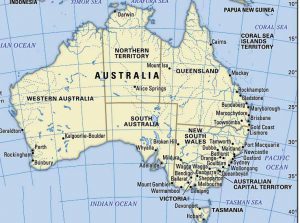 Sydney is the largest city in Australia ranked by population, and it’s also one of the most popular tourist destinations as well as university cities. Sydney is also known for its iconic Opera House and multi-cultural society with people from all over the world.

Travel away from the harbour and into the heart of the city, indulge in the magnificent architecture that ranges in diversity from 1820 to today. Learn about the leaders who became the game-changers for Sydney and who we remember today for their tremendous vision and inspiration.

Biography: Travel has been my passion and occupation for the last 30 years. After finishing school, I embarked on a trip to Europe and the travel bug bit me

Australia’s second-largest is known for its quality of life, and Melbourne is consistently ranked at the top of the most liveable cities in the world. Melbourne is also closing in on the gap to Sydney since the population growth here is faster with more people moving to Melbourne than other major cities in Australia.

The city is also known for its amazing street art and food scene, which has something for every budget and taste.

The Great Ocean Road boasts some of the most magnificent coastal scenery in Australia, along with many beautiful natural sights along the way. On this two day tour we will visit waterfalls, rainforests, cliff side lookouts, The Apostles, Loch Ard Gorge, and London Bridge on the Shipwreck Coast. Hopefully we have the chance to see some of Australia’s wildlife in their natural habitats along the way.

Biography: Hi, my name is James. I am a specialist guide for The Great Ocean Road and Phillip Island. I have been a full time tour guide for many years now

Biography: It comes naturally for me to go the extra ” mile” to make my tours interesting, different and enjoyable and in that way creating a memorable experience.

Brisbane is the biggest city in Australia in terms of total area, but it’s “only” ranked third by population, which means it’s less densely populated than Sydney and Melbourne.

Brisbane is State Capital of Queensland and is known for its pleasant climate year-round as well as being one of the most popular tourist destinations.

Perth is the capital city of the largest Australian state – Western Australia. It’s also the largest city in that state with a population of more than 1.8 million people.

Perth is also known for being the most isolated city in the world, and it takes about 5 hours to fly here from Sydney, which is on the opposite side of the country.

Adelaide is the capital city of the state of South Australia, and the fifth most populous city in Australia. The city is known for its laid-back lifestyle and the proximity of some of the best wine regions in the world.

Adelaide is also known for low housing prices, being one of the cleanest Australian cities as well as having a large number of churches.

Gold Coast is famous for its sandy beaches, surfing as well as beautiful canals and waterways. It’s one of the most populous cities in Queensland and it’s also a major tourist destination.